PHILADELPHIA — The Rev. Gregory Holston, who has served as the executive director of POWER, joined the Philadelphia District Attorney’s Office as the senior advisor on advocacy and policy.

“To be on the ground floor of a really dramatic and revolutionary change in the District Attorney’s Office is such a great opportunity,” said Holston, who stepped down from his post at POWER (Philadelphians Organized to Witness Empower and Rebuild) earlier this year. “I’m confident that the place for criminal justice change in America is the Philadelphia District Attorney’s Office.”

In his new role, Holston will advise District Attorney’s Office employees on “ways to integrate social justice best practices and community-based policies and procedures” into their work. Externally, he will “work to advance the mission of the office to make the criminal justice system in Philadelphia more accessible and accountable” in order to build public trust in law enforcement, the DA’s office and the court system.

The position is newly created.

“As we work to improve public safety in a fair and equitable way, and to reverse decades of harm done by public institutions to historically underserved communities, we must also more directly address the conditions that are conducive to law-breaking and violence,” District Attorney Larry Krasner said in a statement. “I’m glad Gregory Holston is with us. I’m excited about his internal and external advocacy.”

As POWER’s executive director, Holston oversaw the organization’s operations and membership, and led advocacy for causes such as equitable funding for Philadelphia’s public schools, a $15 minimum wage for workers, gun violence prevention and police accountability.

In addition to his work in the DA’s office, Holston serves as pastor at Janes Memorial United Methodist Church in Germantown.

He has committed his life to criminal justice reform, advocating for the poor and disenfranchised, improving education and finding gainful employment for those in marginalized communities.

Holston said it was difficult leaving his post at POWER. However, Holston said that in his new role he will be able to draw upon the resources of the DA’s office to help reform criminal justice “from a front row seat.”

“I have been watching this office ever since Larry Krasner was elected and I am utterly impressed with what I have seen,” said Holston, who began his career as an attorney. “I am convinced that the multi-pronged approach of the office will not only administer justice but fight for those in the system who have not been treated fairly. 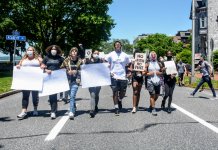