PHILADELPHIA — A year after Cheyney University rolled out big corporate partnerships, some investments have been paying off while questions remain about another.

Cheyney’s most high-profile partnership — with Starbucks — yielded a grant of $100,000, which the university is using to fund a yearlong research project focused on the study of race and access to economic opportunity in the Philadelphia region, said Reggie Borges, a spokesman for Starbucks.

And Epcot Crenshaw Corp., a firm that researches and develops solutions to environmental problems, has moved more than $1 million worth of laboratory assets to the school to help establish the Crenshaw Institute of Applied Science and Technology at Cheyney. That institute is already up and running, and will remain a permanent fixture at the university, said Epcot Crenshaw spokesman Bob Pelc.

But The Institute for the Contemporary African-American Experience at the school has yet to open more than a year after Cheyney President Aaron Walton stood beside Gov. Tom Wolf and corporate leaders to unveil it in July 2018.

“No, the institute is not up and running yet, Cheyney is developing the timeline,” Ekarius said.

In response to questions about all of the partnerships, Walton issued a statement via email on Friday about the Starbucks partnership but did not address the others.

The Institute for the Contemporary African-American Experience is prominently displayed on Cheyney’s website, and referred to simply as “The Institute @ CU.” The website does not say if the institute is operational.

A mission statement for the institute on the school’s website says it serves as a “catalyst and facilitator in creating networks, fostering communications, and developing and testing solutions to contemporary issues among individuals, organizations, and communities, working beyond the walls of the academic institution.”

The site lists Epcot Crenshaw, Jefferson and Starbucks as strategic partners in the institute.

As the nation’s oldest historically Black university struggles with financial and oversight issues and awaits a final determination of its accreditation in November, both Ekarius and Pelc reiterated their commitments to Cheyney.

“Yes, we believe in their mission and feel that they have outstanding leadership in President Walton,” Ekarius said.

“[Epcot] believes that Cheyney University has an extraordinary opportunity to return to its roots in agriculture band mechanics,” Pelc said, “and its resurgence as a source of skilled tradespersons in support of the general economy.”

Robert Bogle, the president and publisher of The Philadelphia Tribune, is the chairman of the university’s council of trustees.

The formation of The Institute for the Contemporary African-American Experience stemmed from a 2017 report from a task force appointed by the Board of Governors for the Pennsylvania State System of Higher Education. Cheyney is a member of the state system along with 13 other schools.

The purpose of the institute is for the study of contemporary issues related to race, ethnicity, access and diversity in American society, officials said in their press conference in July 2018.

Ekarius said Jefferson has partnered with Cheyney on other initiatives.

Starbucks’ relationship with Cheyney was limited to a one-time $100,000 grant from Starbucks’ nonprofit, the Starbucks Foundation, for the study of race and economic opportunities, Borges said. It did not provide funding for The Institute for the Contemporary African-American Experience.

“Beyond that, we have not been involved with them [Cheyney officials] in any other capacity,” Borges said.

Walton said in his email that four undergraduate students at Cheyney were selected to participate in the research project, which kicked off in January, and are being paid through the grant. A freshman intern also is contributing research.

The research team continues to collect and analyze data, Walton said. Cheyney is on track to finalize the study by December, Borges said, and the Starbucks Foundation expects to receive a report about the project that month.

As the university faces allegations of misusing federal scholarship dollars, Borges said, Starbucks has received no red flags over the use of the grant funding. Cheyney also has provided periodic updates about the study throughout the year.

“I don’t have any indication that there’s been any concern on our end that the grant has been misused in any way,” Borges said.

Epcot Crenshaw was named as an early partner on The Institute for the Contemporary African-American Experience, but Pelc did not respond to questions about whether the company is still involved in the project or has provided funding for it.

Epcot Crenshaw moved its laboratory assets to the school this year.

“Granted, our role in the partnership is to enrich Cheyney student’s experience with regards to natural and applied sciences,” he said. “Since our move to campus, the [Epcot] team has actively integrated with Cheyney students and faculty on the daily basis.”

Cheyney’s 11-member council of trustees will meet for its quarterly meeting at 1:15 p.m. on Tuesday inside the Marcus Foster Student Union Center Auditorium at the school, at 1837 University Circle, Cheyney.

Michael D’Onofrio is a reporter for The Philadelphia Tribune, where this story first appeared. 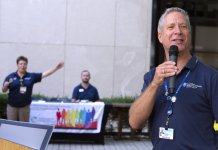