PHILADELPHIA —The number of African Americans living in poverty in Philadelphia has declined slightly in the past two years, according to new U.S. Census data.

The new American Community Survey report indicates Philadelphia’s 2018 poverty rate was 24.5 percent in 2018 — down from 25.7 percent in 2016 — and is the lowest since the 2008 recession. Because the Census Bureau’s 2017 poverty data for Philadelphia was later determined to be erroneous, the new figure is being compared to 2016 data.

“This data gives me hope and confidence that our strategies to reduce poverty are making progress on tackling this decades-old, systemic challenge,” Mayor Jim Kenney said in a news release.

“However, with close to a quarter of our fellow Philadelphians still living in poverty, there is no denying that our poverty rate is too high and we must move faster. Our administration is committed to continuing our efforts to help many more Philadelphians improve their financial stability.”

Bill Golderer, president and CEO of the United Way of Greater Philadelphia and Southern New Jersey (UWGPSNJ), agreed that more must be done to hope those in poverty.

“We’re in the midst of the largest, sustained economic recovery in our history and that recovery has been very uneven,” he said.

“If you’re in the top four quintiles of our economy, there is nowhere better to live in the nation than Philadelphia, but if you’re in the bottom 20 percent, we’re one of the few markets where our neighbors have gone backwards.

“I don’t think that we are doing nearly enough to help our neighbors who are trying to rise out of poverty — kind of make that jump,” he continued.

Part of the problem, said Philadelphia Unemployment Project Director John Dodds, “is that too many of the jobs are low wage and people are in poverty even when they are working.”

He noted that half of city residents don’t have cars, which makes it difficult for them to work in the suburbs where wages are often higher.

“If you are part of half the population that doesn’t have a car, you’re pretty much stuck with working in the city and the wages are much lower,” Dodds said.

Golderer says the United Way is developing a plan around meaningful and measurable interventions to help lift people out of poverty.

He said measures that can be taken such as removing barriers from employment for the formerly incarcerated, making sure that families have access to dependable, quality childcare and draw down funding from Washington for benefits to assist the impoverished.

Kenney said that since 2016, his administration has enacted a three-pronged approach to fighting poverty.

“Our strategies include: stabilizing Philadelphians who need relief right now through housing and other public benefits; helping people remove barriers to employment and gain skills for good-paying jobs; and making long-term investments in quality education to prevent and keep Philadelphians out of intergenerational poverty,” he said.

“Our inclusive growth strategy aims to strengthen economic growth in ways that benefit all Philadelphians and reduce racial inequity.” 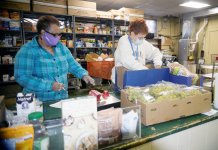