In the lead up to 2020 census, General Assembly lawmakers have their eyes on a small but potentially important change to state law — counting incarcerated people at their homes, not at the prisons where they’re serving their time.

Criminal justice advocates call this issue “prison gerrymandering,” a reference to the practice of drawing legislatives maps to benefit one political party.

Districts across Pennsylvania, with Democratic and Republican lawmakers, get a population boost from the 47,000 individuals currently in Department of Corrections’ custody. These are districts that, without a prison, might need to be redrawn for lack of population.

A growing number of states have taken legislative action to end the practice. But at least one redistricting expert thinks the commonwealth already has the tools needed to address prison gerrymandering.

Right now, the U.S. Census Bureau counts incarcerated people’s cells as their residence, not where they lived before entering prison. Because census data is used for everything from drawing legislative boundaries to distributing federal funds, advocates say this leads to skewed social services and representation.

State Rep. Joanna McClinton, D-Philadelphia, said similar arguments won her over at a national meeting of other black lawmakers in fall 2016.

“I doubt anyone is going to these jails and asking if you have any issues,” she told the Capital-Star.

As she did during last year’s legislative session, McClinton is again sponsoring legislation to mandate that, when congressional, state, and local districts are drawn, an incarcerated individual is counted at their last residential address.

“Everyone sentenced to a crime has a home address,” McClinton said. “If they have a home address in my district, they are taking away from my count.”

A Villanova University study, as reported by WITF, found that eliminating prison gerrymandering would mean four predominantly white and rural state House districts would have too few people. Four urban and mostly black districts, meanwhile, would have too many.

Given the typical size of Pennsylvania House districts — about 63,000 people — the lower chamber is the most likely to be impacted by a change in how inmates are counted, according to Ben Geffen, a lawyer with the Public Interest Law Center in Philadelphia.

Geffen was a litigator on the center’s successful lawsuit to throw out the gerrymandered congressional map drawn by the Republican-controlled Legislature.

To address prison gerrymandering, Geffen pointed to other states, including Maryland and New York, that match inmates with their old home address for redistricting purposes on the state level — even as the federal government still uses prison addresses as home for 2.3 million incarcerated Americans.

New York and Maryland will be joined by Delaware, California, and, just this week, Washington in making that state-level fix for their political maps in 2020.

It may be within Gov. Tom Wolf’s executive powers to make this switch himself, according to Geffen.

Current state election code states that “no individual who is confined in a penal institution shall be deemed a resident of the election district where the institution is located.”

“The individual shall be deemed to reside where the individual was last registered before being confined in the penal institution,” it continues.

Geffen argues that this language could be interpreted so that inmates are counted in their home districts during the 2021 round of redistricting.

That’s only as long as the administration gets to work in advance to connect census data with corrections data.

Wolf, for his part, said he’d like to see the change happen, but was skeptical of the legal argument.

“You ought to talk to the folks in our legal department,” Wolf said. “That’s not what I hear.”

A spokesperson for Wolf later clarified that the governor was referring to counting incarcerated individuals in the census proper, not for redistricting purposes. The administration is still deciding how to handle redistricting data. 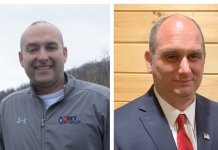