PHILADELPHIA — LeBrian Brown sees an overwhelming number of homeless and formerly incarcerated African Americans pass through the doors of the Broad Street Ministry.

But as the coordinator for the new voter registration program at the nonprofit, Brown says he is helping those Black Philadelphians and others cast their ballots in the upcoming election to have their voices heard.

“I feel real empowered. I feel like I’m giving my people the opportunity to speak up, speak out, get their voices heard and get involved,” Brown said.

Friday was the final day Broad Street Ministry was operating its voter registration program to sign up would-be voters. (The final day to register to vote in the state is Monday.)

As Brown was speaking on the ground floor of the Center City nonprofit, employees and volunteers were preparing other services provided there, including free lunch kits, before the doors opened.

When they did, dozens of individuals, many of whom are experiencing homelessness and food insecurity, stepped into the building and out of the rain.

Since launching around the start of September, the voter registration program at Broad Street Ministry has signed up 182 individuals, who had an average age of 57.5. The program also has gotten 75 individuals to complete the U.S. census.

A mailing address is required in the state in order to register to vote, as well as to obtain a state identification and birth certificate, among other things.

Upwards of 10,000 individuals are registered to use the mail service, which operates five days a week. Last year, the organization processed more than 167,000 pieces of mail.

How LGBTQ Philadelphians are casting their votes this year

Around noon, Michael Harper, 61, stepped up to the voter registration desk inside the nonprofit. While speaking behind a plastic partition, Christine “Chrissy” Ross, a data entry specialist, helped him confirm his voter registration.

Harper, who has previously experienced homelessness, said he intended to vote in person on Nov. 3. Without the access to the voter registration and mail services, the latter of which he has used for more than two years, Harper said it may be more difficult for him to access the ballot box.

Zhané DeShields, who helps register people to vote through the program, said she has noticed that President Donald Trump’s false attacks on mail-in voting were leading some voters there to have doubts about casting a ballot through the mail.

“The president said the mail-in ballots are rigged,” said DeShields.

Trump, a Republican, is running against former Vice President Joe Biden, the Democratic nominee, in the upcoming election. Several other races are on the ballot, along with a handful of ballot questions.

The voter registration program also helps educate voters on the upcoming political races and ballot questions and informs formerly incarcerated individuals that they are eligible to vote, Brown said.

Among those who registered to vote on Friday was Ted Weems.

At 60 years old, Weems, who is experiencing homelessness, said he intended to vote for the first time in the presidential election.

“I feel like it’s crucial this time to vote because of all the things that are going on in life,” Weems said. “There certainly needs to be a change.” 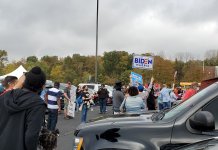