PHILADELPHIA — The Kenney administration has shortchanged the African-American community in its response to the novel coronavirus that has cost Black lives, says a pediatric surgeon working to provide free COVID-19 testing in the region.

On Thursday afternoon, Dr. Ala Stanford, leader of the Black Doctors COVID-19 Consortium, said Mayor Jim Kenney was not deploying enough resources in African-American neighborhoods to fight the disease as Blacks were dying from COVID-19 at higher rates than all other racial groups in the city.

Barriers to testing for the infection remain too high in communities of color, Stanford added during a free testing event at Salem Baptist Church in Abington Township.

“You’ve got to fix the things you can,” she said about the administration. “If you know you can decrease the spread by testing more people, then test more people. But it’s got to be empathetic testers.”

Stanford sounded the alarm more than two weeks after Kenney said he was working with her consortium and “minority folks” to make coronavirus testing more widely available in Black and brown communities.

But Stanford said the Kenney administration hasn’t provided the consortium any financial support or substantive resources to conduct testing and other services, like contract tracing. The consortium is part of the nonprofit It Takes Philly Inc.

Brian Abernathy, the city’s managing director, said during the city’s daily news briefing that the administration has provided some personal protective equipment to the consortium as recently as last week.

The consortium recently submitted a $6.9 million city bid to provide testing, contract tracing and a variety of other services for six months, Stanford said. She expected to get a response from the city next week.

The consortium’s bid, however, was more than double the cost of another applicant to offer similar services, according to The Philadelphia Inquirer. The consortium’s bid also included $566,000 for executive salaries and wages, of which $225,000 was earmarked for Stanford, the Inquirer reported.

Health Commissioner Dr. Thomas Farley said during the daily briefing that the city will evaluate the consortium’s bid.

Abernathy said the city has not yet entered into any contracts for the bid.

“The RFP [request for proposal] was really an effort to try and get to those harder-to-reach communities that we recognize we have not done as good of a job as we should have,” he said.

Stanford stepped away from her private practice and staffing privileges at local hospitals to volunteer full-time with the consortium.

The consortium provides free COVID-19 testing and other disease-related services using healthcare volunteers and donations. As of Thursday afternoon, the group had raised more than $178,000 through a GoFundMe campaign.

She expected the consortium could function under its current volunteer model through the end of the year without any financial support from the city.

Since mid-April, the Black Doctors COVID-19 Consortium has held free testing sites at 16 locations and tested more than 4,500 individuals since mid-April, the vast majority of whom were African American. (A total of 90,046 people in the city have been tested as of Thursday.) Approximately 18% to 20% of the tests at each consortium site have come back positive, Stanford reported. 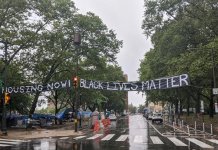