The journalist J. Howard Wert journeyed to the underworld in 1912 — and he lived to tell the tale.

“These shacks have been speakeasies, gambling halls, and foul dens of prostitution,” Wert wrote in a Harrisburg Patriot-News column, describing alleys just a stone’s throw from Pennsylvania’s state Capitol. “Around some linger legends of deeds of beastiality and depravity that seem almost unbelievable. It seems odd that so much sin and crime could be condensed within a space so limited.”

Wert wrote of Harrisburg’s Old Eighth Ward, a 20-block neighborhood that once stood between the Capitol and the State Street Bridge. Sometimes called the “Bloody Eighth” or simply “Ate,” the ward cemented its reputation as Harrisburg’s red-light district by the turn of the 20th century.

“It was considered to be a neighborhood of blight, crime, and loose living, all in the shadow of the Capitol,” said David Pettegrew, professor of history and director of the Digital Harrisburg project at Messiah College. “That was a problem for Harrisburg’s elite.”

More than 1,600 residents representing two percent of Harrisburg’s population lived in the Old Eighth in 1900, Pettegrew said. And while it may have been Harrisburg’s most notorious neighborhood, it was also a racial and religious melting pot. Its cramped tenements housed hundreds of immigrants, mainly Germans, Irish Catholics, and Russian Jews. Forty percent of its population were African Americans, many of them freed slaves.

Today, not a single remnant of the Old Eighth Ward still stands. The entire neighborhood was demolished in the early 1900s to make room for the Capitol complex expansion. It was an early casualty of the City Beautiful Movement, a turn-of-the-century effort to remake American cities.

Before and after images show an eastward view of the Old Eighth Ward and the State Bridge, and a modern-day view of Capitol Park. Credit: Old Eighth Ward photo via Pennsylvania State Archives, curated by Rachel Williams and reprinted with permission from Messiah College History Department. Capitol Park photo via Flickr user Wally Gobetz.

“There’s not a brick, a rock, a cornice, or a cobblestone left — absolutely nothing,” Lenwood Sloan, a Harrisburg-based activist and organizer, said. “Hundreds of workers come to the Capitol every day without knowing there was a proud African-American community that lived there.”

To the extent that people today know of the Old Eighth Ward, Sloan said, its lore is dominated by tales of sin and blight. He and a group of other historically minded residents want to change that.

A group spearheading the Commonwealth Monument Project is seeking state permission to install a memorial to Old Eighth Ward residents at the corner of 4th and Walnut streets. The monument would feature statues of four prominent African-American activists, and a pedestal listing 100 black families who were displaced by the Eighth Ward’s demolition.

The timing is fitting, Sloan says, considering the monument will pay tribute to four people active in Pennsylvania’s abolition and suffrage movements.

According to Sloan, memorializing their legacies alongside that of the Old Eighth Ward would reclaim important pieces of Harrisburg’s forgotten past.

‘Where newcomers could settle’

By night, the Old Eighth may have buzzed with vice and lascivious crime. But during the day, Sloan said, it was a quiet, if not poor, residential area that supported a robust economy. Its small businesses included tailors, Jewish delis, German ale halls, barber shops, and butchers.

The neighborhood began to grow before the Civil War, Pettegrew said, and became Harrisburg’s focal point as the city developed around it. Its proximity to the Harrisburg train station and the city’s now-defunct canal system made it a natural point of entry to Pennsylvania’s capital.

For migrants without many means, it also became home.

“It was a district where newcomers could settle,” Pettegrew said. “Affordability and convenience were the main factors, but if you look at other neighborhoods, like the Tenth Ward in the northern part of the city, they were really closed to outsiders.”

The Old Eighth’s lawless reputation spread far and wide. Countless visitors patronized its speakeasies and dance halls on weekends. Canal workers and railroad laborers flocked to its saloons on Friday nights, their pockets flush with a week’s pay.

Patriot-News columnist Wert was by turns dismayed and sentimental while describing the Old Eighth’s seedy establishments. Local officials, he noted, did little to combat them. They seemed happy to let unsavory activity continue so long as it stayed within the ward’s borders.

That was welcome news to the workers in its thriving service industry.

“Yes, there was vice, but those places also hired maids and waiters and musicians,” Sloan said of the Old Eighth’s saloons and gambling dens. “It was part of the economy. You can’t write off the tenderloin when you look at it as an engine for an African-American economy.”

Attitudes toward the Old Eighth changed after the state Capitol burned down in 1897.

In the wake of the tragedy, Pettegrew said, some lawmakers called to relocate Pennsylvania’s capital to Philadelphia or Pittsburgh. Desperate the keep the Capitol complex in their city, Harrisburg leaders promised to clean up the area around it.

That put the Old Eighth firmly in their crosshairs.

In the early 1900s, the Commonwealth of Pennsylvania started to buy up the property on the periphery of the Capitol complex. By 1917, it had spent more than $2 million purchasing 541 parcels of land — a total of 27 acres — in the Eighth Ward, historian Michael Barton writes in the Pennsylvania History journal. Almost all the sales were brokered through “amicable proceedings”; only seven parcels were seized by eminent domain.

Residents of the Old Eighth may have operated businesses, but few owned property. Since the vast majority were renters, Pettegrew said, they had little control over the fate of their neighborhood. The demolition of the Old Eighth, which took place over a decade, scattered its inhabitants across Harrisburg and the Mid-Atlantic region.

Students at Messiah College found that many Old Eighth residents who stayed in Harrisburg settled in working-class neighborhoods along Sixth Street. Some may have crossed the State Street Bridge to Allison Hill. The city’s Jewish population found a home in the Uptown and Riverside neighborhoods, near Susquehanna Township.

Today, no trace remains of the bustling neighborhood that once housed much of Harrisburg’s black and immigrant populations. The Capitol Park, Irvis Office Building, and Forum auditorium all stand in its place.

But thanks to Sloan and the Commonwealth Monument Project, the memory of the Old Eighth is stirring in the Capitol once again. The Legislature’s Arts and Culture Caucus is drafting a resolution endorsing the monument, which needs to clear the House and Senate before the Department of General Services makes a final ruling on its permit.

Sloan said DGS has already granted preliminary approval for the monument. (A spokesperson for the agency could not be reached for comment Friday.) Organizers have secured one-quarter of the $400,000 budget, he said, and will seek more sponsorships once DGS grants them full rights to the site.

“We hope it will enliven a corner that thousands of people cross every day,” Sloan said. “And we hope people learn the value of the vote.” 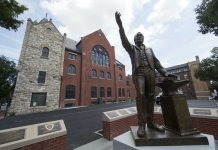