As the race heats up, is Mehmet Oz distancing himself from Trump? | Five for the Weekend

The branding has disappeared from the Republican Senate hopeful’s website, but he can’t quit the former president quite yet

It’s Capital-Star Editor-in-Chief John L. Micek once again, sitting in for the vacationing Cassie Miller, who returns next week.

We’ll turn our attention this Saturday morning to Pennsylvania’s nationally watched U.S. Senate campaign. After winning a close fight for the nomination, Republican Mehmet Oz apparently has now decided he can (mostly) live without one of the things that got him over the finish line.

As Axios reports, Oz, a celebrity physician, has quietly ditched the Trumpian branding from his campaign website as he moves into the thick of the general election campaign against Democrat John Fetterman. But, also realizing on which side their bread is buttered, Oz’s campaign has not completely distanced itself from the former president.

“The endorsement is the first endorsement listed on our website and we changed the banner to thank Pennsylvanians after the recount [against primary challenger David McCormick] was completed,” campaign spokesperson Brittany Yanick told Axios.

Oz also spoke kindly of Trump during a June 10 appearance on conservative talker John Fredericks’ show, where the GOP Senate hopeful dunked on the work of the U.S. House committee investigating the Jan. 6, 2021 insurrection at the U.S. Capitol.

“I’m not happy with the fact that we’re dragging the president through the mud on this. It seems extremely partisan,” Oz said, according to a transcript obtained by the Capital-Star. “And I think the American people appreciate that. You don’t have a jury by your peers.”

” … We have shootings that make everybody wonder what is going on here. This could be a third world nation with the way we’re dealing with murderers in our streets,” Oz continued. “And all that’s happening and you know, and we’re being pulled to the side and distracted on primetime television, with hearings that are designed to do just one thing, which is to attack one half of the political spectrum.”

Oz’s perch between, as they say, two stools is the current GOP dilemma. He may want to appeal to moderates in the suburbs, but he can’t afford to ditch the base. We’ll see how the balancing act continues to play out during the campaign this summer and heading into the fall.

As ever, the rundown of this week’s top five most-read stories starts below. 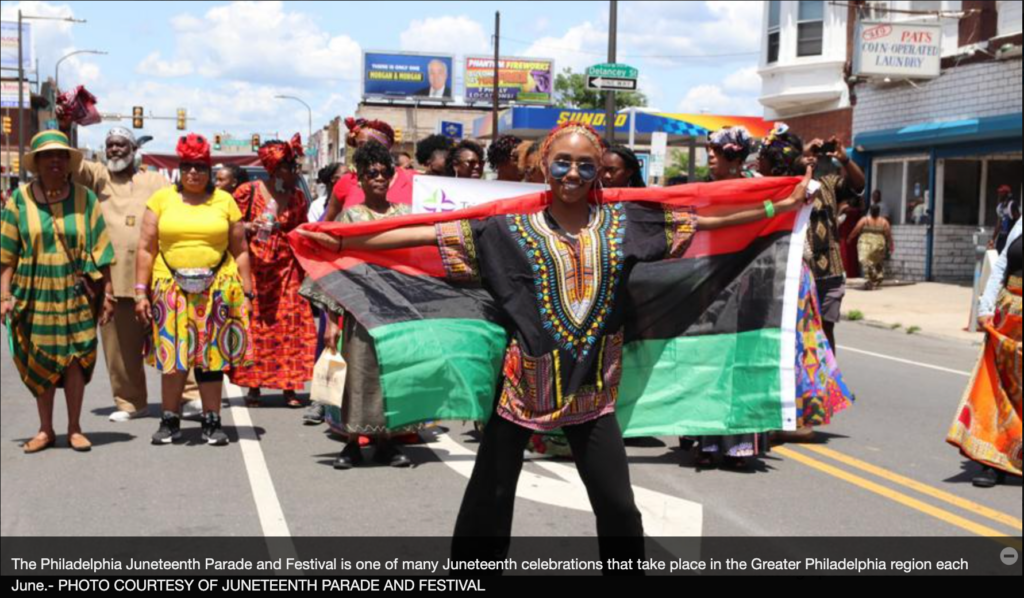 (Image via The Philadelphia Tribune)

1. Juneteenth in Philadelphia: A list of events celebrating the holiday

Community events, concerts and a parade are just some of the activities that will be taking place Sunday [June 19] in Philadelphia to celebrate Juneteenth.

“Juneteenth is the celebration of freedom,” said Tamara Staley, president and CEO of The Philadelphia Juneteenth Family Inc. “The holiday was first celebrated in Texas with food, music and dance. Today, we continue with that tradition not just locally, but nationally.”

Groups from Arizona, Georgia, Michigan, New Mexico, Nevada, Pennsylvania and Wisconsin all allegedly sent lists of so-called alternate electors to the National Archives after the 2020 election. The slate of fake electors includes Lou Barletta and Charlie Gerow, both candidates for governor in Pennsylvania; Burt Jones, a candidate for lieutenant governor in Georgia; James Lamon, a candidate for U.S. Senate from Arizona; and candidates for state legislative seats.

3. What do about the emerging paramilitary wing of the GOP | J. Patrick Coolican

It’s campaign season, which means Republican candidates for office wielding weapons and threatening to use them.

… J.R. Majewski, a Republican candidate for Congress in Ohio, ran an ad (since taken down for copyright issues) in which images of President Joe Biden, Minnesota U.S. Rep. Ilhan Omar and Colin Kaepernick (?!) are flashed on the screen, and then Majewski casually walks around with a rifle and says he’ll “do whatever it takes to return this country back to its former glory.”

Blake Masters, the Trump-endorsed U.S. Senate candidate in Arizona, builds his own guns and recently showed one off on social media with the caption: “I will remind everyone in Congress what ‘shall not be infringed’ means.” 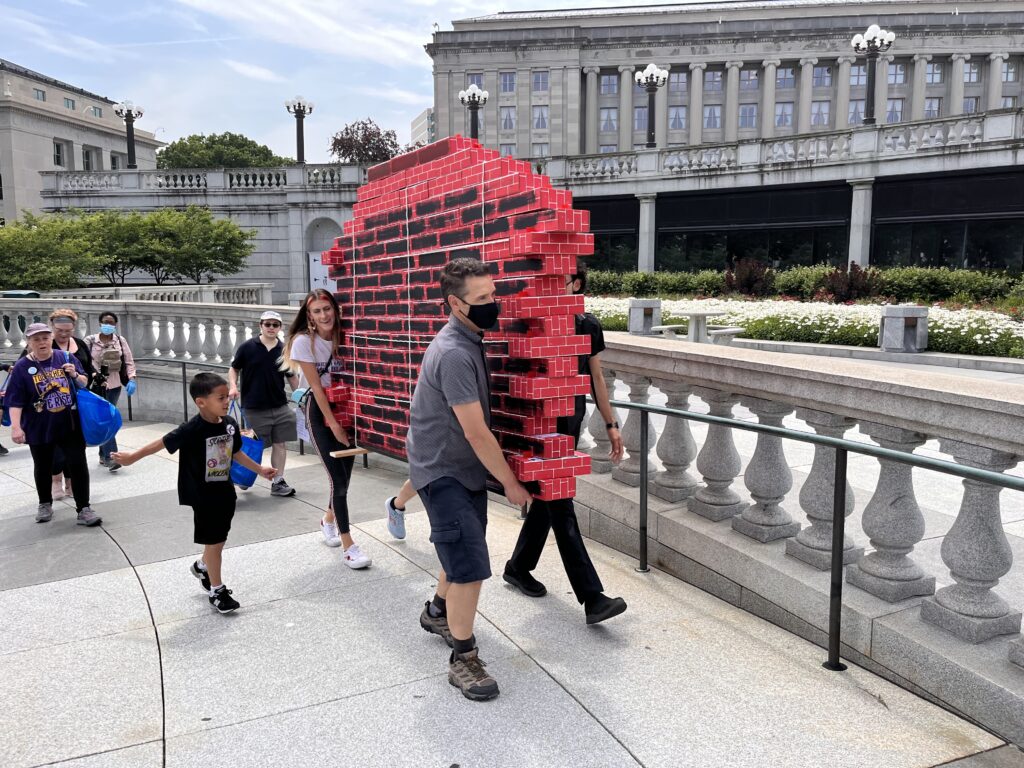 Members of the advocacy group, March on Harrisburg, carry a section of the ‘Wall of Corruption’ up a ramp outside the Pennsylvania Capitol’s East Wing on Tuesday, 6/21/22. The group has spent months pressing the Republican-controlled House of Representatives to pass a gift ban for state lawmakers (Capital-Star photo by John L. Micek).

4. Pushing for a gift ban, activists tear down ‘Wall of Corruption’ outside Pa. Capitol

Members of the activist group MarchOnHarrisburg erected a metaphoric “Wall of Corruption” outside the Pennsylvania Capitol on Tuesday, as they renewed their call for passage of a legislative gift ban.

Advocates said the wall, which they argue was paid for lobbyists and special interests, kept everyday Pennsylvanians from having their voices heard in the halls of power.

“We’re here to bypass the House majority leaders and call for our own vote of 102 [lawmakers] to vote for the gift ban,” the group’s executive director, Rabbi Michael Pollack, said Tuesday. 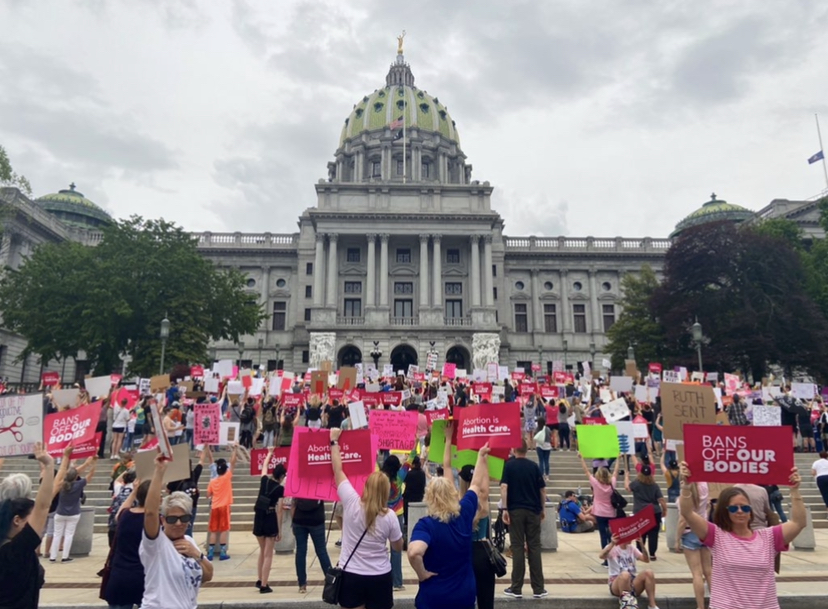 Hundreds of protesters rally in Harrisburg on Saturday, May 14, 2022, to promote abortion access. (Capital-Star photo by Marley Parish)

5. Abortion is still legal in Pennsylvania. What to know about existing requirements, access

Pennsylvania does not have a trigger law on the books to outlaw abortion if the U.S. Supreme Court overturns the landmark Roe v. Wade ruling, which guaranteed federal constitutional protections for abortion rights.

So if the nation’s highest court strikes down the 1973 decision, the commonwealth could become a sanctuary state for those seeking an abortion but whose home states have outlawed or heavily restricted the procedure.

But — should the high court overturn the ruling — the results of the governor’s and legislative races this November could drastically change how, when, and why someone can receive an abortion — if at all — in Pennsylvania. And some lawmakers in the Republican-controlled General Assembly have proposed limiting the procedure and restricting funds to health care centers that perform abortions, despite Pennsylvanians supporting keeping abortion legal under all or some circumstances.

For now, the Abortion Control Act, a 1982 state law, permits abortions with some restrictions and requirements.

And that’s the week. See you all back here on Monday.

As the race heats up, is Mehmet Oz distancing himself from Trump? | Five for the Weekend