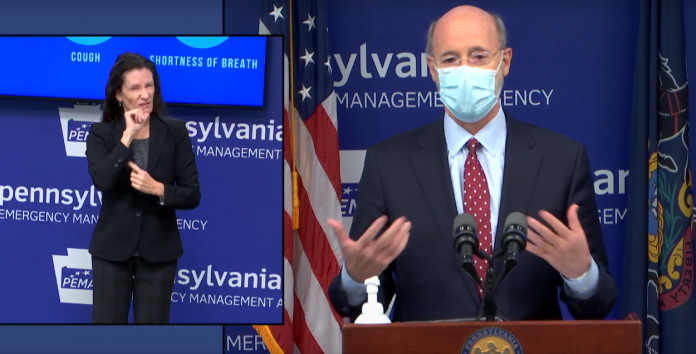 Cases and hospitalizations from the COVID-19 pandemic continued to rise in Pennsylvania, according to the Pennsylvania Department of Health.

More than 11,300 Pennsylvanians have died of COVID-19 since March.

In a press conference Monday, Gov. Tom Wolf and Dr. Rachel Levine, Pennsylvania’s Secretary of Health, once again implored Pennsylvanians to wear masks and stay inside as much as possible.

Now two weeks after Thanksgiving, health experts have warned that case counts could spike as exposure over the holiday begins to be detected.

Over the weekend, White House coronavirus response coordinator Deborah Birx said that “every state across this country needs to increase their mitigation,” adding that states must inform citizens that the post-Thanksgiving surge in cases “will happen this week and next week.”

But cases in Pennsylvania have been on the rise since late September, according to data tracked by Spotlight PA. The seven-day average for new cases has roughly doubled every month since then, from 913 on Sept. 30 to 2,200 on Oct. 1 to 4,200 a day on Nov. 30.

Such an increase in cases and hospitalizations was unsustainable, Wolf said, leading to “crowded conditions and dwindling resources” in hospitals.

However, Wolf added he did not plan to take further action yet. Instead, he said the administration would wait to see case data over the coming days before making a final decision on new mitigation measures.

“If this continues, that’s going to call for one set of actions,” Wolf said. “If the data changes, over the next couple days, we might have different sets of decisions to make.”

Wolf and Levine took some limited steps last month to prevent an increase in cases. They announced new out-of-state travel restrictions, but declined to enforce them, instead calling for Pennsylvanians to willingly avoid traveling home for the holidays.

Wolf also ordered bars to close at 5 p.m. on the Wednesday before Thanksgiving, a historically busy night of drinking.

Krys Johnson, an assistant professor of epidemiologist at Temple University, said that she expected to see more stringent restrictions from Wolf, sooner rather than later.

“Everyday we have the opportunity to do better, and right now is the time to do better,” Johnson told the Capital-Star. “We haven’t seen the peak from Thanksgiving yet. If we want to see improving figures by the end of this month we need to take proactive precautions.”

Johnson suggested that the state could stiffen masking requirements to make sure everyone wears a mask inside when not at home.

She also suggested that the state should close indoor dining, similar to in the early days of the pandemic in spring.

“The blunt instruments we had to use to buy time back in March and April, we don’t need anymore,” Wolf said, referring to earlier measures, including stay-at-home orders and widespread business closures.