Pa. Liquor Control Board will yank Russian products from its shelves

Hours after Gov. Tom Wolf issued a call, the Pennsylvania Liquor Control Board said that it will remove Russian-made products from the commonwealth’s roughly 600 state-owned liquor stores as a “show of solidarity and support for the people of Ukraine.”

“As of today, these products will no longer be sold or procured by the PLCB,” the board’s chairperson, Tim Holden, said in a statement. “Given the evolving political-economic climate, it’s just the right thing to do.”

The move is largely a symbolic one. Among the scores of brands and products it stocks, only two products stocked in stores – Russian Standard and Ustianochka 80-proof vodkas – and about a half-dozen Special Order brands come from Russia, the regulatory board said, adding that it will not be “restricting sales of Russian-branded products that are not sourced from Russia, as doing so could unfairly and adversely impact those brands.”

The board is also unlikely to take much of a hit to its bottom line.

“In the last 52 weeks, those Russian-made products accounted for less than $1.1 million in sales – 0.06% – out of more than $1.7 billion of total spirits sales,” spokesperson Shawn Kelly told the Capital-Star.

With the international community coming together to punish Russia economically for its brutal invasion of Ukraine, the commonwealth entered the fray over the weekend, Wolf issued his call early on Sunday afternoon.

“I have joined with leaders across the nation and across the world in condemning these attacks and expressing support for the people of Ukraine,” Wolf, a Democrat, said Sunday in a statement released by his office.

“I appreciate the board’s efforts to quickly identify Russian-sourced products currently being sold at Fine Wine & Good Spirits stores,” Wolf continued. “I urge the board to take these further actions as a show of solidarity and support for the people of Ukraine, and an expression of our collective revulsion with the unprovoked actions of the Russian state.”

Kelly told the Capital-Star on Sunday afternoon that liquor regulators were in receipt of Wolf’s letter and were “considering next possible steps.” By early evening, the board had made its decision.

In a statement, the trade association that represents Pennsylvania’s bar and tavern owners said it backed the administration’s decision.

“This is a reasonable option for the Commonwealth to take to show its disapproval of the Russian invasion of Ukraine and the damage the attack has done to world peace,” the Pennsylvania Licensed Beverage and Tavern Association said through a spokesperson.

“As far as our Association knows, and so that we do not confuse them with “Russian-themed” vodkas, there are a few actual Russian-made vodkas sold in Pennsylvania’s stores. They include Russian Standard and Ustianochka. Russian Standard is owned by Roustam Tariko, a Russian oligarch,” the trade association said.

“With many great vodka options available, our Association is encouraging Pennsylvania’s family-owned taverns, bars, clubs, and licensed restaurants to avoid using Russian-made vodka for now,” the trade group continued. “It will be a minor inconvenience for some, but national American brands like Tito’s from Texas and locally made vodkas like Holla Spirits in York are good options when mixing drinks that require vodka.”

On Saturday, a group of Republican lawmakers in the state House sent a letter to Liquor Control Board Chairperson Tim Holden 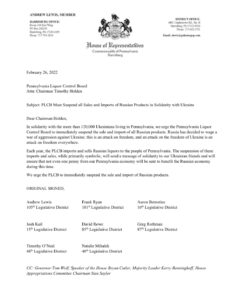 also urging him to act.

With the situation on the ground changing rapidly, the liquor board’s position similarly evolved.

On Friday, Kelly told the Capital-Star that the liquor oversight agency had “no immediate plans” to remove Russian-sourced products from its shelves. In the wake of Wolf’s letter, the agency’s position appeared more fluid.

The oversight agency “abides by all applicable federal rules and regulations, including sanctions, if and when they are implemented. While we are unaware of any bans on Russian imports at this time, should such a ban become part of sanctions, we would no longer purchase Russian wines and spirits,” Kelly said.

“Fine Wine & Good Spirits remains committed to providing a wide range of products from around the world to suit numerous consumer tastes,” he concluded. “Understanding there are also various points of view on today’s political-economic climate, we believe that consumers and licensees should have the freedom – within the constraints of federally imposed sanctions – to make their own purchase decisions. As such, we have no immediate plans to pull any product from our shelves.”

On Saturday, New Hampshire Gov. Chris Sununu signed an executive ordering the Granite State’s state liquor stores to remove Russian-made and Russian-branded spirits from their shelves, according to published reports. Acknowledging that the move was mostly symbolic, Sununu, a Republican, said the Russian liquor industry could be take an economic hit if if other states followed New Hampshire’s lead.

“We see what’s happening. People are losing their lives,” Sununu told WMUR-TV. “It’s unprovoked aggression, and if we can get New Hampshire to do their part and take these products off of the Russian shelves—I don’t know anyone buying that garbage right now, frankly—its a good thing and it’s a step we can make.”

DeWine, a Republican, said Russian Standard Vodka is the only Russian-owned distillery that sells vodka in his state.

Today I directed @OhioCommerce to cease both the purchase & sale of all vodka made by Russian Standard, the only overseas, Russian-owned distillery with vodka sold in Ohio. Russian Standard's vodka is sold under the brand names of Green Mark Vodka & Russian Standard Vodka.

State liquor regulators “[estimate] that there are approximately 6,400 bottles of vodka made by Russian Standard currently for sale in Ohio’s 487 liquor agencies across the state,” DeWine tweeted. “Retailers have been asked to immediately pull Green Mark Vodka and Russian Standard Vodka from their shelves.”

Pa. Liquor Control Board will yank Russian products from its shelves

Yanking Russian booze is a lay-up. Leaders still need to… by John L. Micek February 28, 2022
Pennsylvania lawmakers look to pull public funds from Russia… by Stephen Caruso February 28, 2022
How should Dostoevsky and Tolstoy be read during Russia’s… by Capital-Star Guest Contributor June 7, 2022