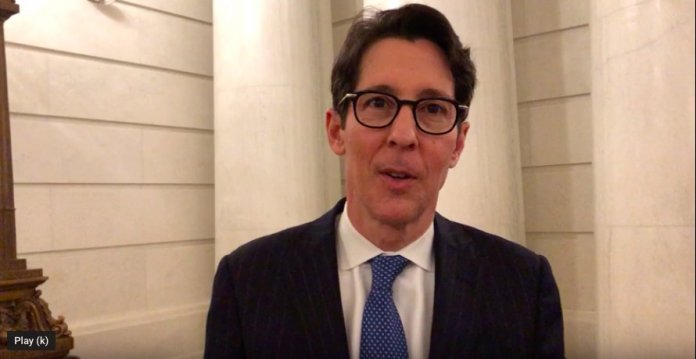 Pennsylvania’s top financial officer says he’s committed to helping the Commonwealth build up its emergency savings account and that he wants to “continue doing great things” with his office.

Right now, the $22.5 million balance sitting in Pennsylvania’s Rainy Day Fund, the account that’s supposed to serve as a hedge against future downturns, is “nothing to write home about,” state Treasurer Joe Torsella said Wednesday. “But at least we have one for the first time in 10 years.”

The Philadelphia Democrat, now in the third year of his first, four-year term, made his comments after an appearance before the House Appropriations Committee.

General government operations for the Treasury Department are flat-funded at $37 million for the fiscal year that begins July 1, according to Gov. Tom Wolf’s 2019-2020 budget proposal. The agency’s total expenditures are projected to rise by 5.78 percent to $1.23 billion.

Last year, Wolf, a York County Democrat, made the first deposit into the Rainy Day Fund in recent memory, putting $22 million into the emergency account. The administration’s new budget proposal calls for continuing those deposits, with an eye toward building a $278 million balance by 2024.

“This deposit into the rainy day fund helps stabilize our budget for the first time in nearly a decade and exceeds some pre-budget estimates that the fund would receive $14 million,” Wolf said in a statement at the time. “And while some states are borrowing from their funds or making no contributions, Pennsylvania is making a $22 million deposit.”

In a brief conversation, Torsella also sketched out some of his priorities for the coming budget year. They include expanding the state’s 529 college savings program and building on what’s known as the PA Able program, which allows disabled Pennsylvanians and their families to save, tax-free, for related expenses.

Treasurer Joe Torsella: Pa’s Rainy Day Fund is ‘nothing to write home about’ but at least it has one again

The Pa. Legislature must do better on probation reform next session...