In an intra-party scrum gone public, three Republican lawmakers from Lebanon County are calling on the county’s GOP chairman to resign over what they say is a “racist” mailer directed at an incumbent county commissioner.

“The cumulative effect of your actions over the past few months have damaged the Republican brand and threaten the electoral success of every Republican candidate and public official in the county,” the letter reads.

The mailer attempts to tie Lebanon County Commissioner Bill Ames, a Republican running for his third term, to a policy that limits cooperation with federal Immigration and Customs Enforcement, as LebTown reported.

It features an image of Juan Ramon Vasquez, an undocumented man who was released from a Philadelphia jail after ICE issued a civil request to detain him. Vasquez later raped a child.

Because these type of ICE requests come without a criminal warrant, counties that honor them can be held liable if they, for example, illegally detain an American citizen. Such a situation played out in Lehigh County in 2008, and the county was forced to pay $95,000 in damages.

Lebanon County adopted a non-compliance policy more than a decade ago in response to liability concerns. But commissioners including Ames voted to revoke the policy in 2017.

Last month, the county was removed from a list of so-called “sanctuary” jurisdictions curated by the Center for Immigration Studies, an anti-immigration think tank designated as a hate group by the Southern Poverty Law Center.

The mailer was paid for by Better PA, a political action committee associated with Long’s father’s firm. In their letter, the three lawmakers allege that was intentionally done to obfuscate the connection between Long and the “smear campaign.”

In an undated letter reported by LebTown, Long rejected the call for his resignation and pointed to the local party’s endorsement of Ames’ opponent to question the commissioner’s conservative bonafides.

“The fact of the matter is that the Lebanon County Republican Committee overwhelmingly rejected the candidacy of Bill Ames by a three to one vote despite the impassioned pleas of Representative Diamond to the contrary,” Long said. 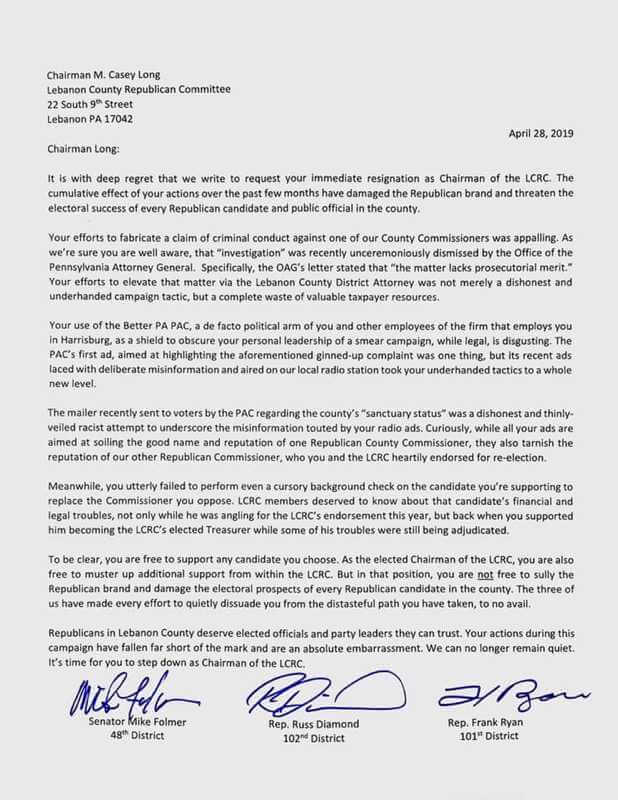 by Stephen Caruso, Pennsylvania Capital-Star
May 3, 2019