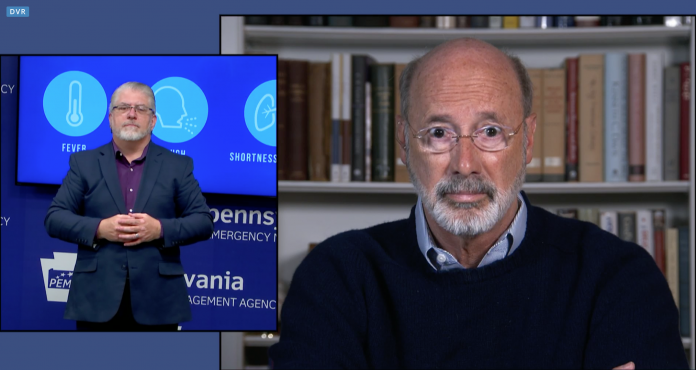 With COVID-19 infections increasing across the state and more counties under stay-at-home orders, the Wolf administration has asked the Trump administration for additional tools to fight the pandemic.

On Sunday, Gov. Tom Wolf’s office asked the White House for a “major disaster declaration,” that it says will provide  “additional support for state, county and municipal governments and certain nonprofits, as well as individuals who are struggling during the COVID-19 outbreak.”

“The COVID-19 outbreak has taxed our commonwealth and our communities in ways that are almost incomprehensible,” Wolf said in a statement his office released on Sunday morning. “I am calling on the President and the federal government to make available to us the assistance that will make a tangible difference in the lives of our friends and neighbors, and the dedicated public servants who are working in overdrive to support them.”

On March 6, Wolf signed a Proclamation of Disaster Emergency, which was the first step toward requesting a federal major disaster declaration. The state is also covered under a nationwide emergency declaration that took effect on Jan. 20. That provides “reimbursement for eligible expenses for emergency protective measures to state, county and local governments and certain nonprofits for the duration of the emergency incident,” Wolf’s office said.

If approved, the major federal disaster declaration would provide many of the same protective measures provided under the nationwide proclamation. Those services include “disaster unemployment assistance, crisis counseling, community disaster loans and the Disaster Supplemental Nutrition Program; as well as Statewide Hazard Mitigation,” Wolf’s office said.

As of midday Saturday, state health officials had confirmed 2,751 COVID-19 cases in 56 of 67 counties, with 34 known fatalities. Residents in 22 counties are now under a stay-at-home order.

Trump has granted similar requests by at least three other states in the past 24 hours: Colorado, Massachusetts and Michigan, according to published reports.