No matter what county you live in, if you plan to vote in Pennsylvania in 2020, you will be voting with new machines, chosen by each county’s election officials at the order of Gov. Tom Wolf last year.

To get the commonwealth ready for the changes, the Department of State has launched a webpage called “Ready to Vote” to help Pennsylvanians identify what method their county has chosen and how the process works.

Once a county has been selected, the page directs visitors to a “Learn more” button where voters can read step-by-step instructions on how to cast their vote using the new method. 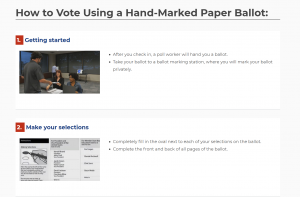 “We want to make sure all voters go to the polls feeling confident and equipped with the information they need to cast their ballots on their new voter-verifiable paper ballot voting systems,” Secretary of State Kathy Boockvar said of the changes.

In addition to the new voting machines, Pennsylvanians should expect several other changes this year, as well.

For the first time, straight ticket voting will not be present as an option for voters hitting the booth, a change included in Act 77, an election reform bill passed by the General Assembly in October 2019 that was deemed a “historic” and long-overdue update to Pennsylvania’s 80-year-old election code.

Bill that overhauls how Pennsylvanians can vote is headed to Gov. Tom Wolf

Also new this year is the option for mail-in ballots, which anyone can use, not just absentee voters such as active duty military personnel and college students.

Can’t make it to the polls on Election Day? Here’s how to request a new mail-in ballot online

“The Department of State looks forward to continued strong partnerships with county officials as we work together to make voting easier, more accessible, and more secure for millions of Pennsylvanians,” Boockvar said, calling the changes “exciting.”