In the ultra-competitive statewide race for auditor general, Philadelphia’s Nina Ahmad has emerged as the Democratic nominee for the row office position.

Ahmad, a former Philadelphia deputy mayor, emerged from a six-way primary to win the Democratic nomination.

Ahmad beat Lamb by nearly 100,000 votes, according to unofficial tallies from the Department of State. 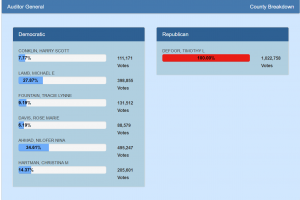 With almost 500,000 votes, and 34 percent of the vote, the Bangladesh-born Ahmad will face off against Republican and Dauphin County Controller Tim DeFoor, in the November general election.

The winner will fill the seat being vacated by current Auditor General Eugene DePasquale.

In a statement posted to her campaign website, Ahmad said she wanted to “thank the three other women and two men who ran for auditor general for running strong campaigns based on progressive ideas for delivering positive change in our commonwealth.

“Second, as a board member for the National Organization for Women, I was particularly proud that so many highly qualified women ran for this important office,” she continued. “I hope that’s a sign of things to come. Last, but definitely not least, I can’t thank the broad coalition of progressives, unions, and community leaders from across the state who supported my campaign. I promised change and voters responded resoundingly by electing a new face and a new voice. I am deeply humbled.”

A 2018 candidate for lieutenant governor, as well as an entrepreneur and molecular biologist, Ahmad has promised, if elected, to focus on health, employment, and the well-being of minority communities across Pennsylvania.