A beloved tradition at the Pennsylvania Farm Show has returned with the unveiling of the show’s annual butter sculpture.

The 2022 sculpture, unveiled Thursday, highlights the theme of “Harvesting More” and is meant to symbolize different factions of the dairy world coming together in celebration. The sculpture features an urban farmer and rural dairy farmer toasting over a glass of milk. Behind them is a backdrop featuring skyscrapers next to trees and a barn full of cows.

The piece was sponsored by the American Dairy Association North East and sculpted by Jim Victor and Marie Pelton. Land O’ Lakes in Carlisle donated the butter.

“Once we started working on the armatures, we decided it would be more interesting to make it more dimensional,” Pelton told PennLive. “The background really came to life and became larger. Merging those two different types of farming into one cohesive sculpture design was a big challenge.”

The 2022 sculpture used more than 1,000 pounds of butter. But don’t try to spread any of it on your toast, the sculpture butter is not suited for consumption. According to the American Dairy Association North East, it would require 21,200 pounds of milk to produce that amount of butter, the equivalent of one day’s work of 353 cows.

The butter sculpture took a year off in 2021, as the farm show went virtual due to the pandemic. In 2021, Pennsylvanians were asked to make their own butter sculptures at home and produced some pretty interesting results. 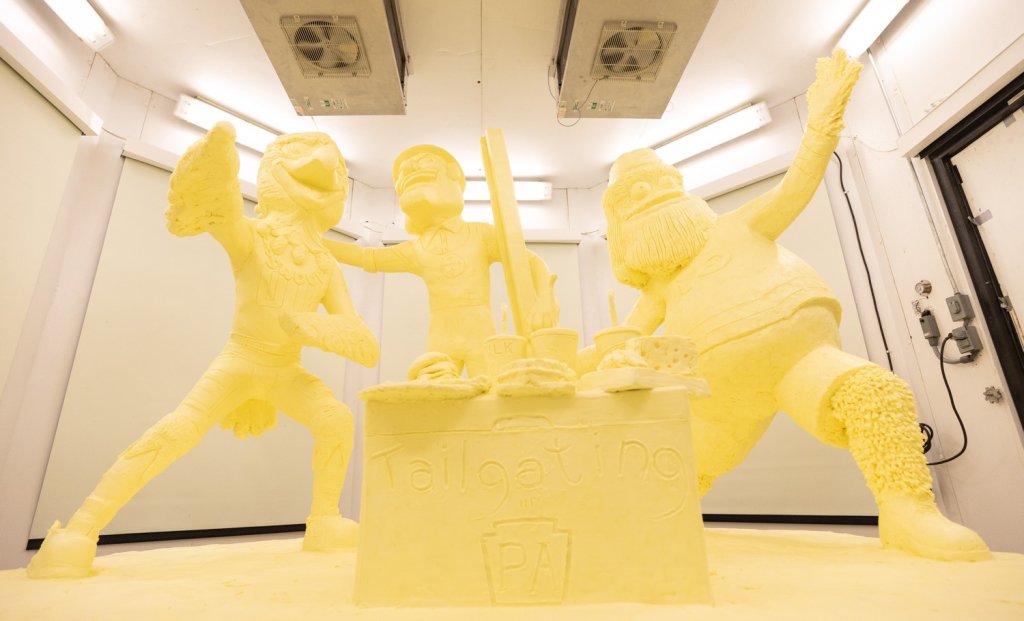 Lt. Gov. John Fetterman and Pa. Agriculture Secretary Russell Redding unveiled the 2020 Pennsylvania Farm Show butter sculpture. It was carved from a half-ton of butter (Commonwealth Media Services photo)In 2020, the Farm Show unveiled a wild popular butter sculpture that included three sports mascots from across the commonwealth: Swoop of the Philadelphia Eagles, Gritty of the Philadelphia Flyers, and Steely McBeam of the Pittsburgh Steelers.

The latest and best in state and national coverage from our content partners and sites across the States Newsroom network.

Farm bill season arrives: What’s the outlook for 2023? by Allison Winter August 14, 2022
A reflection on Charles Dickens and the history and meaning… by David DeWitt December 24, 2022
Ag Sec Redding looks back on eight years of progress and… by Cassie Miller December 26, 2022